Objectives: The aim of this study was to examine trends in biomarker studies in Alzheimer's disease (AD)using bibliometric analysis.

Materials and methods: A bibliometric analysis was performed on research articles published about biomarkers in AD in the Scopus database. The data was retrieved from January 1, 1970 to October 27, 2021, using the keywords “biomarker” or “biomarkers” and “Alzheimer” or “Alzheimer’s disease” in the search bar.

Conclusion: Since AD is a global health problem, developing countries, as well as developed countries, should be encouraged to participate in biomarker studies on AD.

Dementias are a group of brain diseases that cause a decrease in cognitive functions. Alzheimer’s disease (AD) is the most common cause of dementia worldwide.[1] The most common reason for the first admission in AD is short-term memory loss.[2] The disease progresses with changes in behavior and character; it also affects other cognitive areas such as thinking, decision making, and speaking. It eventually causes the loss of mental function, making the individual unable to perform daily activities.[3] The definitive diagnosis of AD is histopathological confirmation in autopsy materials.[4] The diagnosis of AD in clinical practice is based on the patient’s medical history, clinical symptoms, and the exclusion of other causes of dementia. Biomarkers and structural imaging of the brain are also used in diagnosis.[5]

A biomarker is defined as a “human or animal biological property whose in vitro measurement or identification is useful for the prevention, diagnosis, prognosis, treatment, and follow-up of human or animal diseases, as well as their understanding”.[6] Amyloid beta-protein, total tau, and phosphorylated tau as cerebrospinal fluid (CSF) biomarkers, and brain imaging techniques such as magnetic resonance imaging (MRI) or positron emission tomography (PET), are used in the diagnosis of AD.[7]

The Alzheimer’s Disease Guide covers three stages of AD: preclinical, mild cognitive impairment (MCI), and Alzheimer’s dementia. The preclinical stage is a process that includes amyloid deposition in the brain and some changes in nerve cells, in which clinical symptoms are unclear. At this stage, biomarkers are used for research, not in clinical practice. High tau and decreased betaamyloid in CSF, decreased glucose uptake in PET, and atrophy in some parts of the brain in MRI are used as biomarkers in the MCI stage with mild memory problems and Alzheimer’s dementia stage with memory loss as well as other cognitive and motor symptoms.[8] Even if some interventions are implemented after the diagnosis of AD, it cannot be prevented or treated. Since pathological changes begin before typical symptoms appear, researchers have focused on biomarkers that can be used in the diagnosis of AD, especially in the preclinical stage.[9]

The aim of this study was to analyze global developments in biomarker studies in AD globally.

Bibliometric analysis was carried out using data obtained from the Elsevier Scopus database. The Scopus database was accessed through the online library of Çanakkale Onsekiz Mart University. The data was retrieved from January 1, 1970 to October 27, 2021, using the keywords “biomarker” or “biomarkers” and “Alzheimer” or “Alzheimer’s disease” in the search bar. Since the Scopus database is updated daily, data obtained in a single day was included to avoid bias. The authors, journals, countries, affiliations, funding sponsors, and publication date of the articles were all examined. Citation analyses were also performed. No country-year distinction was made.

The graphics of the Scopus database were used for visualization and also to create graphics Microsoft Office Excel 2010 (Microsoft Company, Seattle, USA) program was used. All of the data in the study was presented in percentages, numbers, and bar charts.

We reached a total 2,099 documents as a result of our search. Reviews (n=381), conference papers (n=81), and editorials (n=57) were also frequently published documents, with 1,385 (65.99%) of them being articles. Only articles were analyzed in our study as their higher scientific value.

The first article was published in 1995,[10] and the number of publications has increased since 2000, as shown in Figure 1.

Figure 1. The number of publications over the years.
× 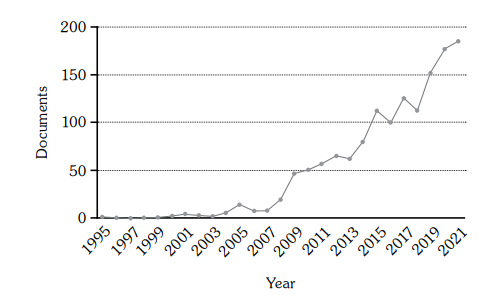 Most of the articles were written in English (n=1,346, 97.18%). Also French, Spanish, Chinese, German, Japanese, Russian, Czech, Dutch, and Hungarian were the top 10 preferred languages.

Figure 2. The most publishing journals on Alzheimer and biomarker studies.
×

Kaj Blennow (Sweden) (n=72) and Henrik Zetterberg (Sweden) (n=70) were the most productive researchers on Alzheimer’s and biomarker research. Sweden and the United Kingdom were the most productive countries in top-ranked affiliations on Alzheimer’s and biomarker research, as shown in Table 1. There were no developing countries among the top 10 affiliations.[10-19]

One hundred fifty-four (11.11%) of the articles had not yet been cited. Randall J. Bateman from Washington University School of Medicine in St. Louis (USA) was ranked first on the list of the most cited authors. Table 2 shows that the most cited articles were published in OA journals.

The evaluation of scientific productivity can be determined by using bibliometric studies. Top productive authors, affiliations, countries, etc. can all be evaluated using this method. The number of bibliometric analyzes has recently increased in the medical field. Bibliometric analyzes can be performed using pre-existing databases of publications on a subject, or they can be performed using datasets created by the researchers themselves, based on their preferences. The Web of Science, Scopus, and Medline are the most widely used bibliometric databases.[20-27] We preferred the Scopus database as it contains over 30,000 peerreviewed journals from various disciplines (life sciences, social sciences, physical sciences, and health sciences).

In previous bibliometric studies,[22] images were created using additional programs (e.g., VOS viewer), but in our study, visualization was created solely using ready images and graphics from the Scopus database.

Although there are bibliometric studies on AD in the literature, no bibliometric analysis of publications on biomarkers in AD has been published to date.[28-31]

In all studies, the language of publication was generally English, and the most preferred language was also English (n=1,346, 97.18%) in our study.[25] This is because English is the most commonly used language in scientific literature.

While the first publications with Alzheimer’s and biomarkers keywords in PubMed Medline were published in 1983[32,33] and in 1991 in Web of Science,[34] the first publication with the same keywords in our study according to Scopus was published in 1995.[10] The fact that different journals are included in the databases may explain why the results differ between the three databases. According to the search of all three databases, the number of publications with the keywords Alzheimer’s and biomarkers has increased since the 2000s.

In all studies, the USA consistently ranks first in scientific productivity.[25] The USA similarly ranked first in the list of publications made by the country in our study. However, it was seen that the first institution was from Sweden and the second one was from England according to the top-ranked institutions in productivity. The top 10 countries in the ranking of biomarker studies in AD were developed countries while developing countries were not included in the top 10. Although 858 publications were not funded by any sponsor, the most funded sponsors were The National Institute on Aging [n=348], the National Institutes of Health [n=345], and The United States Department of Health and Human Services. This is thought to be because researchers in developed countries have easier access to resources. Alzheimer’s disease is a major health issue all over the World, and it imposes an economic burden on countries. Therefore, biomarker studies for disease prevention and early diagnosis in developing countries should be supported, and researchers should focus their research on this area.

Nonetheless, the current study has limitations. Since the Scopus database was only used for research purposes, a bias may have occurred in this study. Studies in journals that are not indexed in the Scopus database, and also publications in local journals that are not listed in international indexes, could not be included. Consequently, we cannot claim that our study on Alzheimer’s and biomarkers using a single database represents the entire literature.

In conclusion, although bibliometric analyses are the subject of social sciences, they have recently become more common in the field of medicine. As a result of our study, it has been observed that the number of publications in developing countries is low. Biomarker studies should be supported because AD is a global health problem that requires collaboration from all countries. We believe that biomarker studies in Alzheimer’s disease should be guided, especially in developing countries, based on the bibliometric analysis we conducted in this study.

Since this was not a human or animal study, the ethical committee approval was not required. The study was conducted in accordance with the principles of the Declaration of Helsinki.
Data Sharing Statement: The data that support the findings of this study are available from the corresponding author upon reasonable request.

The author declared no conflicts of interest with respect to the authorship and/ or publication of this article.

The author received no financial support for the research and/or authorship of this article.