Adenosquamous carcinoma of the liver (ASC) is considered a very rare subtype of cholangiocarcinoma. The definition of ASC indicates a carcinoma including both adenocarcinoma and squamous carcinoma components. Knowledge about primary hepatic ASC is limited to case reports. It reveals diagnostic problems in radiology practice. In this case report, we represented a 56-year-old woman who was admitted to the hospital with a complaint of epigastric pain for three months.

Adenosquamous carcinoma (ASC) of the liver is considered a very rare subtype of cholangiocarcinoma.[2] The definition of ASC indicates a carcinoma including both adenocarcinoma component and squamous carcinoma component.[3] Diagnosis of primary liver ASC is a clinical problem since there are no specific symptoms, serum markers, or welldefined radiologic findings.[4] Also, knowledge about primary hepatic ASC is limited to case reports. It reveals diagnostic problems in radiology practice and in this report, we discussed its radiologic appearance with clinical, surgical, and pathologic correlation.

A 56-year-old woman with a complaint of epigastric pain for three months was admitted to General Surgery Clinic, Marmara University Hospital. The detailed history of the major complaint did not contain any other information. There was no specific information about family history, no drug or alcohol intake, and no tobacco use. Physical examination was normal except for epigastric tenderness. Laboratory results were as follows; aspartate transaminase (AST): 46, alanine transaminase (ALT): 196, alkaline phosphatase (ALP): 255, total bilirubin: 2.7, direct bilirubin: 1.45, international normalized ratio (INR): 1.35, Na: 135, K: 2.5. HBsAg and anti-HCV were negative. Alpha-fetoprotein (AFP) was negative.

An abdominal ultrasound (US) examination was performed due to slightly elevated ALT and direct bilirubin.

The abdominal US showed normal liver dimensions and borders. There was a cystic mass situated at the hilus with solid components which had papillary projections to the lumen. It was 51x43x46 mm in diameter. Then, an abdominal computed tomography (CT) with oral and intravenous (IV) contrast was performed. Abdominal CT showed a cystic-solid complex mass located at segment four with minimal local biliary duct dilatations. The solid part was hypodense in non-contrast series and had minimal peripheral enhancement after IV contrast. There were also millimetric cysts dispersed in the liver parenchyma, as shown in Figure 1. Although the mass had a close relationship with the right portal vein, there was no sign of vascular invasion. The liver was not cirrhotic. 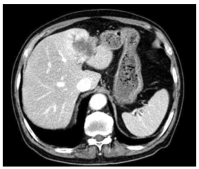 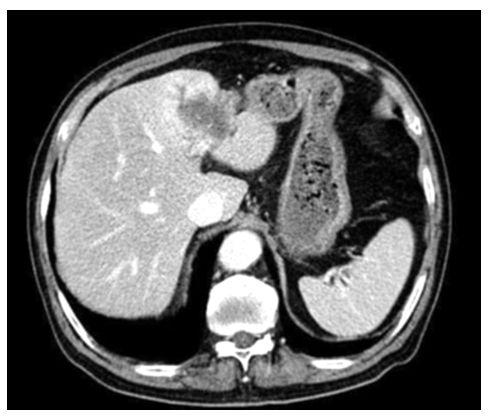 A US-guided percutaneous liver biopsy was performed on the lesion. Tru-cut biopsy result revealed adenocarcinoma metastasis. In order to search for primary carcinoma, endoscopy, colonoscopy, endoscopic US, and abdominal magnetic resonance imaging (MRI) with intravenous contrast were performed. Endoscopy showed hyperemic antral mucosa and a 6 mm ulcer in the second part of the duodenum. Grade one internal hemorrhoids were detected in colonoscopy. The endoscopic US for evaluation of the pancreaticobiliary system revealed normal results. As these results and imaging showed, no primary tumor and absence of metastasis on imaging lead to a decision of surgical resection of the lesion.

On gross examination of the resection material, an ill-defined, centrally cystic, peripherally solid tumoral mass was seen. Cystic areas contained keratin debris with foreign body giant cell reactions. Peripheral solid areas showed an infiltrative tumor within a desmoplastic stroma. The tumor consisted of both adenocarcinoma areas with moderatelydifferentiated malignant glandular structures and squamous cell carcinoma areas with keratin pearls and intercellular bridges, as shown in Figures 2a and b. On immunohistochemical tests CK7 and CK19 were positive, and p63 was found to be positive on the squamous cell carcinoma component, as shown in Figures 3a-c. The tumor was signed out as primary adenosquamous cell carcinoma. During the follow-up, the patient had no complaints. 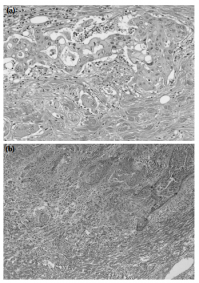 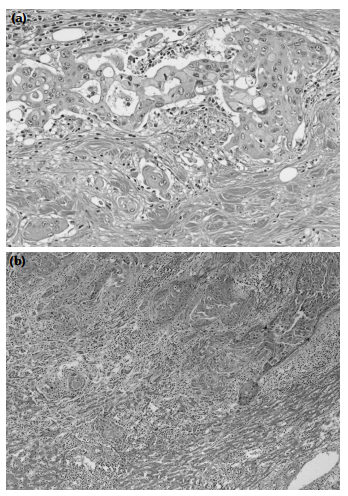 The pathophysiology of the disease is thought to be chronic inflammation causing biliary epithelial metaplasia.[3]

Imaging features mimic hepatic CCC, hepatic metastasis, abscess, and biliary cystadenoma hence clinical information is important for radiologists. As we know from very few case studies, primary ASC of the liver may cause fever, leukocytosis, high C-reactive protein (CRP), or non-specific complaints like epigastric pain as occurred in our case. Jaundice is not very common but slightly elevated bilirubin levels may be seen. Serum carbohydrate antigen 19-9 (CA19-9) levels are high in most of the case studies.

It has a very poor prognosis with early metastasis and a high recurrence rate. Survival after surgery is about one year in most cases.

The radiologic appearance of primary liver ASC is not specific. In this case, the US showed a cystic mass situated at the hilus with solid components which had papillary projections to the lumen. Abdominal CT with IV contrast revealed a cystic- solid complex mass with minimal local biliary duct dilatations. The lesion was hypodense and had peripheral rim-like enhancement at the portal venous phase. A hypodense lesion and peripheral rim-like enhancement may also be seen at CCC, hepatic abscess, and hepatic metastasis.

An abdominal MRI is also important to rule out any other primary tumor. On MRI, the high protein content of the necrotic fluid causes the lesion to appear with high signal intensity on T1-weighted images. Noncontrast T2-weighted imaging demonstrated a well-circumscribed, highsignal intensity mass in the liver. After contrast media, the lesion showed minimal peripheral enhancement of the cystic part at the portal venous phase. The solid part of the lesion showed enhancement in the hepatic arterial phase and was sustained till the portal venous phase, as shown in Figures 4a, b. 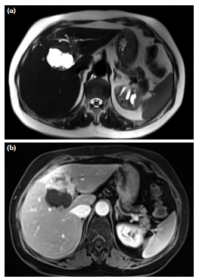 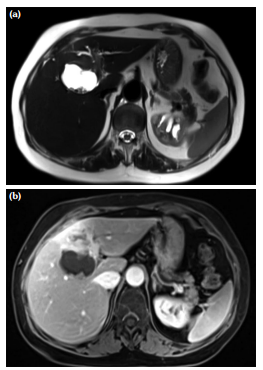 Radiologic features of the lesion are very similar to hepatic CCC, except cystic part. Narrowing of the portal vein is quite common for CCC, but it is not expected for primary ASC. Therefore primary ASC is a subtle diagnosis. A cystic component is the key finding for suspicion. Also in case of clinical/radiologic discordance, a Tru-cut biopsy may be helpful. But in our case, the Tru-cut biopsy revealed adenocarcinoma metastasis. This may also be helpful for diagnosis indirectly.

Treatment of choice is tumor resection and adjuvant chemotherapy. If primary resection is not possible, chemotherapy with/without partial resection is considered. Therefore, the radiologist should also detect any metastasis. Metastasis of primary liver ASC is mostly at lymph nodes and peritoneum. Peripheral hepatic lymph nodes are typically affected and peritoneal metastasis is mostly seen as soft tissue nodules.[6] The case of Yokota et al.,[7] shows similar imaging findings, except that lesion was solely cystic and did not contain a solid part.

In conclusion, it is difficult to make a definitive diagnosis of primary hepatic tumors without biopsy. However, clinical, histopathological features and imaging findings may aid in diagnosis. Liver resection treatment can be effective in some of these patients. The low incidence of ASC makes it difficult to conduct large sample studies.

A written informed consent was obtained from patient.
Data Sharing Statement: The data that support the findings of this study are available from the corresponding author upon reasonable request.