What should we do after resected colonic diminutive polyps?

Objectives: We aimed to evaluate the histopathological features of diminutive polyps and to find an answer to the question about the post-resection management of these polyps.

Materials and methods: Between January 2017 and February 2022 a total of 1,768 patients (796 males, 972 females; mean age: 59.8±12.2 years; range, 31 to 89 years) who underwent colonoscopy were evaluated retrospectively, and included in the study. Data on the patient’s demographics, colonoscopy, and pathology results, as well as the location, size, and histopathological characteristics of the polyps, were all recorded on the registration form. After the polyps were classified according to their size and localization, they were recorded together with their histopathological features and, statistical analysis was performed.

Conclusion: In our study, most of the diminutive polyps were non-neoplastic, while those in the neoplastic group had very few advanced histopathological features and no carcinoma was present in any of the polyps. There were no advanced histological findings in any of the polyps, particularly in the rectosigmoid region. In conclusion, we believe that removal of diminutive polyps in the rectosigmoid region without optical chromoendoscopy or histopathological examination can be cost-effective and reliable.

All formations protrude from the epithelium into the lumen in the gastrointestinal tract are called polyps. The majority of colorectal cancers occur as a result of the malignant transformation of polyps, and this period is approximately 10 years.[1] Polyps are divided into two main groups according to their histological features: Neoplastic and non-neoplastic polyps.[2]

More than 90% of colorectal polyps are small (6-9 mm) or diminutive (≤5 mm),[3] and half of them are non-neoplastic.[4] The presence of high-grade dysplasia, villous component, and carcinoma in a polyp are considered advanced histopathological features.[5] Diminutive polyps are common, and very few have advanced histological findings. Therefore, the probability of developing colon cancer is quite low.[3,6]

After recent studies, it has been recommended to remove or leave diminutive polyps in place after they are evaluated with optical chromoendoscopy. It has been reported that this type of endoscopic diagnosis and treatment is cost-effective with less risk.[6-9] However, the standard currently available in most centers is to resect the polyps and send them for histopathological examination.

The purpose of this study was to evaluate the histopathological features of diminutive polyps detected and resected colonoscopically, as well as to find an answer to the question of post-resection management of these polyps.

The study was conducted by retrospectively evaluating the patients who underwent colonoscopy in the endoscopy at KTO Karatay University Medical School Medicana Affilated Hospital, Department of Gastronterology and General Surgery between January 2017 and February 2022. A total of 1,768 patients (972 males, 796 females; mean age: 59.8±12.2 years; range, 31 to 89 years) who underwent colonoscopy were scanned and included in the study. Previous surgical resection of any part of the colon, a history of colon cancer, a history of inflammatory bowel disease, the presence of familial polyposis syndrome, inadequate bowel preparation, or inaccessibility to the cecum were considered as exclusion criteria. Demographic characteristics of the patients were recorded from the hospital information system. Colonoscopy and pathology reports were also examined and the location, size, and histopathological features of the polyps were recorded in the registration form. A soft aqueous diet was started at least 48 hours before the procedure, and colon cleansing was performed with oral 500 mL sennoside solution + rectal 210 mL sodium phosphate enema. The procedure was performed by a gastroenterologist and a general surgeon with a Fujinon 4450 video colonoscope (Fujifilm Medical Systems Inc., Tokyo, Japan) and a Fujinon 7000 systems (Fujifilm Medical Systems Inc., Tokyo, Japan) under moderate sedation with midazolam, fentanyl, and propofol. After cecal intubation, in the pull-back phase, the location, size, and morphology of each polyp were recorded in the report. Polyp size was estimated by comparing the diameter of the open biopsy forceps or the open snare placed against the polyp. After the polyps were excised with forceps or snare, each was sent to the pathology laboratory in a separate formol solution and evaluated by a pathology physician.

We initially classified polyps as: neoplastic (adenomas) or non neoplastic (hyperplastic, other benign histology). If villous features were present, we considered high-grade dysplasia, or carcinoma in situ adenomas, advanced polyps. We divided the polyps into four groups according to their size: dimunitive (≤5 mm), small (6-9 mm), large (10-19 mm) and very large (≥20 mm). 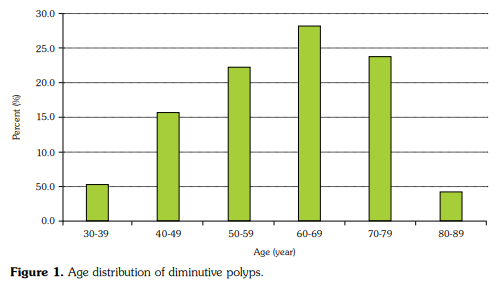 When the diminutive polyps were evaluated in terms of advanced histopathological features, six (2.3%) of them had villous components while none of them had dysplasia. All polyps with villous components were in the proximal colon. Of the 83 polyps other than diminutive polyps, 31 (37.8%) had a villous component, six (7.3%) had high-grade dysplasia, and three (3.7%) had carcinoma in situ. It was observed that the rate of advanced histopathological features increased as the polyp size increased (Figure 2). 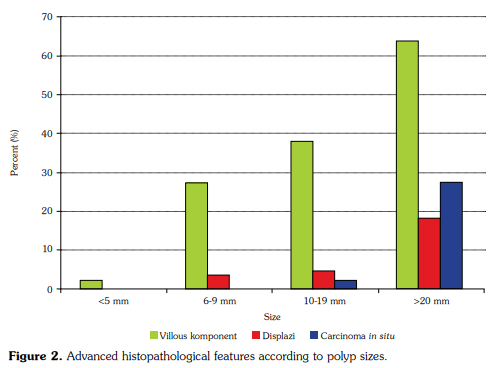 In our study, we found that most of the diminutive polyps were non-neoplastic, whereas those with neoplastic had very few advanced histopathological features and no polyps had dysplasia or carcinoma.

Recently, it has been recommended to determine the structure of the polyp with an optical chromoendoscopy during the procedure for diminutive polyps and to decide accordingly. This new type of endoscopic diagnosis and treatment has been found to be cost-effective with less risk. The Preservation and Incorporation of Valuable Endoscopic Innovations (PIVI) guideline on the evaluation of the histopathology of diminutive polyps was developed by the American Society for Gastrointestinal Endoscopy (ASGE) to provide guidance on the appropriate use of optical diagnosis.[9] In the PIVI guideline, the ASGE recommended that if ≥90% agree with histopathology in determining the surveillance intervals following polypectomy, the exit and discard strategy should be applied.[12] However, ASGE emphasized that optical diagnosis should only be performed by well-trained endoscopists.[12-14] In addition, endoscopic optical diagnosis is significantly dependent on the quality of colon cleansing and the technical imaging features of the device.[15,16] Although the optical diagnosis, resect, and discard concept offered great potential to improve the practice of colonoscopy, it has not gained widespread acceptance, particularly due to concerns about misdiagnosis, potentially emerging medicolegal issues, and assigning incorrect surveillance intervals to patients. A recent survey revealed that endoscopists did not adopt the use of the resect and discard strategy in clinical practice due to concerns of misdiagnosis.[17] In recent years, artificial intelligence (AI) has been introduced for the detection and diagnosis of colorectal polyps, has begun to be applied, and has given promising results. However, available data on the performance of AI on colorectal polyp characterization and detection are scattered. For this purpose, 7,680 polyps from 18 studies were included in the meta-analysis by Lui et al.[18] They found that AI had a sensitivity of 92.3% and a specificity of 89.8% in histology prediction, and a negative predictive value of 91.3% for histological prediction of diminutive polyps. Today, the use of such applications is very low due to technical inadequacy and inexperience. For this reason, the need for applications that can be easily applied by everyone still continues. Recently, Taghiakbari et al.[19] reported in a prospective study that they developed a simplified and operatorindependent resect and discard strategy to circumvent the problems associated with optical diagnostics. This location-based resect and discard (LBRD) did not require endoscopist skill as it was not based on the optical diagnosis. All diminutive polyps located anatomically in the rectosigmoid colon were previously considered non-neoplastic, while all diminutive polyps located in the proximal sigmoid colon were considered neoplastic (low-risk adenomatous polyps). Therefore, this model used the anatomical location of the diminutive polyp as the sole criterion to predict histology and was not dependent on optical diagnostic criteria. In this study, the LBRD strategy outperformed the 90% PIVI quality benchmark required for its clinical application, and the authors reported that the LBRD strategy was better than optical diagnostics. In our study, more than half of the diminutive polyps were in the rectosigmoid region, and most of these polyps (62.7%) were hyperplastic polyps, and the rest were low-risk adenomatous polyps. While none of the polyps in this region had advanced histopathological findings, the number of polyps with villous components increased as one went towards the proximal segments. In addition, none of our diminutive polyps had dysplasia or carcinoma. We believe that the LBRD strategy may be appropriate due to its advantages such as cost-effectiveness, no worries about waiting for pathology results, and reduced workload due to not returning for the result. In another study, Duong et al.[20] developed a simplified polyp-based resect and discard (PBRD) strategy that does not require training of endoscopists, assigning surveillance intervals based solely on the size and number of small and diminutive polyps, without the need for pathology or an optical diagnosis. The authors reported that the PBRD strategy had an excellent surveillance agreement with pathology-based management at a rate of 97.8%, and this strategy reduced pathologic examinations by 58.7%. Although cancer was not detected in polyps of 6-9 mm in this study, it has been reported in the literature that there is a risk of T1 cancer in polyps of 6-9 mm in size.[21] We also did not detect carcinoma in any of the 6-9 mm polyps in our study, but 27.5% of these polyps had advanced histological features such as villous components and 3.45% high-grade dysplasia. We are of the opinion that the resect and discard strategy may not be appropriate for polyps other than diminutive polyps due to the risk of cancer miss.

Most centers do not have optical chromoendoscopy and AI. Currently, routine practice is to resect the polyp and send it for histopathological examination. The LBRD and PBRD strategies are promising for the removal and disposal strategy of diminutive polyps as they eliminate the need for optical chromoendoscopy and AI. Larger-scale prospective studies are needed on this subject.

Nonetheless, there are certain limitations to our study. First, our study is retrospective, and we have a relative polyp count, second.

In conclusion, in our study, advanced histopathological findings were very few in diminutive polyps and none in those in the rectosigmoid region. With these findings, we believe that removing diminutive polyps in the rectosigmoid region without sending them for histopathological examination may be reliable and cost-effective. More information on this subject will be obtained with larger prospective studies to be conducted in the future.

The study protocol was approved by the Konya Medicana Hospital Academy and Ethics Committee (date/no: 28.01.2022, 2022/1). The study was conducted in accordance with the principles of the Declaration of Helsinki.

A written informed consent was obtained from each patient.