Hyperbaric oxygen (HBO2) therapy is regarded as a safe treatment, particularly in outpatients with anaerobic infections, vasculitis, and gangrenous lesions, such as the diabetic foot. However, there is clinical evidence in the literature that seizures occur during HBO2 treatment due to oxygen toxicity in the central nervous system. This unique reaction may occur in individuals with no history of epilepsy or brain injury. In this case report, we aimed to present a 47-year-old male diabetic foot patient with chronic osteomyelitis who was cured by hyperbaric oxygen therapy but had a generalized tonic-clonic seizure in the seventh session and had no history of epilepsy or brain damage.

Hyperbaric oxygen (HBO2) therapy is considered a safe treatment, particularly in outpatients with anaerobic infections, vasculitis, and gangrenous lesions, especially those such as the diabetic foot.[1] However, there is clinical data in the literature that seizures develop during HBO2 treatment due to oxygen toxicity associated with the central nervous system (CNS).[2] This unusual reaction may occur in individuals without a history of epilepsy or brain damage.[3] In this case, we aimed to present a diabetic foot patient with chronic osteomyelitis who was cured by HBO2 therapy but had a generalized tonic-clonic (GTC) seizure in the seventh session and had no history of epilepsy or brain damage.

A 47-year-old immunocompetent male patient with no other comorbidities besides known type 1 diabetes mellitus (T1DM) and who had received parenteral antibiotic treatment for diabetic foot infection at the external center six months ago was admitted to Çanakkale Onsekiz Mart University Health Practice and Research Hospital Department of Infectious Diseases and Clinical Microbiology, with complaints of discharge wound and chills, nausea, and vomiting on the sole of the right foot for three months.

Upon examination, it was observed to be a 4x3 cm in size, 1.5 cm deep, and foul-smelling purulent discharge ulcer wound with callus tissue around the right foot plantar side that completely disturbed the integrity of the sole of the foot. In addition, tinea unguium was detected on all fingers, as shown in Figure 1. Vital values and other system examinations were normal, with C-reactive protein (CRP): 10.8, white blood cell (WBC): 7960, neutrophil (NEU): 6430, sediment: 79, and glucose: 288 in the tests. All fingers of metatarsal bone tissue were found irregularities on foot radiographs and chronic osteomyelitis was thought to be interned for further examination and treatment. Empirical ciprofloxacin 2x400 mg and clindamycin 3x600 mg intravenously (IV) and terbinafine 1x250 mg orally were started by taking a swab culture from the patient's discharge wound. The patient, who was recommended Chopart amputation by orthopedics, refused the operation. The IV antibiotic therapy of the patient was arranged as IV ampicillin sulbactam and ciprofloxacin after methicillin-sensitive Staphylococcus aureus (MSSA) was isolated from the wound swab culture. Forty sessions of HBO2 therapy were planned for the patient. 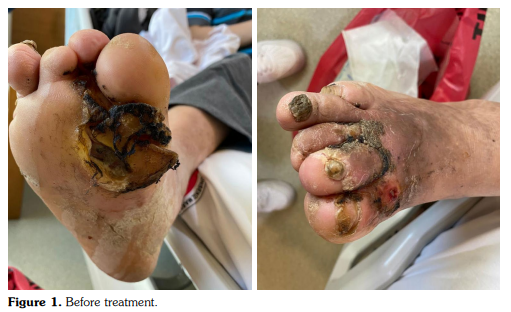 The patient, who received daily HBO2 therapy, had a seizure during the 7th session, and this treatment was discontinued. The examinations did not reveal any pathology to explain the seizure. As a precautionary measure, treatment with ciprofloxacin was discontinued on the 18th day because it could lower the seizure threshold. Hyperbaric oxygen therapy of the patient who did not repeat the epileptic seizure in the clinical follow-up was terminated with the seizure. The patient was discharged on the 54th day of his hospitalization in good general condition after the ulcer wound on the sole of the foot was closed, as shown in Figure 2. 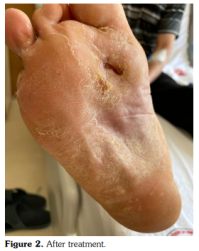 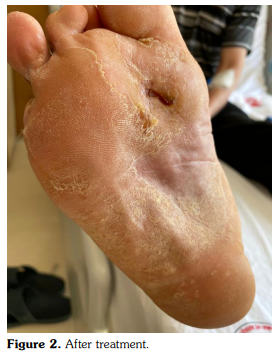 Hyperbaric oxygen therapy, an important auxiliary anti-edema effective treatment method usually applied in chronic wounds that do not heal despite surgical procedures and other medical treatments, contributes to tissue oxygenation.[1] Seizures of oxygen toxicity are a rare but known complication of HBO2 therapy.[2] Convulsions induced by HBO2 therapy are caused by the treatment’s toxic effect on the CNS, and seizures caused by oxygen toxicity during treatment are extremely rare. In the study in which Hadanny et al.[4] analyzed a total of 62.614 hyperbaric sessions applied to 2.334 patients, seizures occurred in only seven patients (0.3%). Regarding seizures caused by oxygen, HBO2 therapy may be considered safe for patients with chronic neurological conditions other than uncontrollable epilepsy. There was no history of epilepsy in our case, and there were no findings in the examinations that supported the diagnosis of epilepsy.

Many patients undergoing HBO2 treatment have medication that may contribute to the seizure due to their medical condition. In a study in which Seidel et al.[3] investigated whether patients who had seizures in the hyperbaric room had other medical illnesses or were taking medications that lowered the seizure threshold and thus contributed to bouts of oxygen toxicity, they found hypercapnia, narcotic withdrawal, alcohol dependence, and the use of antidepressants, tramadol or cephalosporin/ceftriaxone as risk factors in a total of seven seizure cases in five patients.

In conclusion, in our case report, ciprofloxacin was used that lowers the seizure threshold. Although successful results were obtained with the treatment in our diabetic foot patient with chronic osteomyelitis with concomitant use of ciprofloxacin, the treatment was terminated because of the GTC seizure that the patient had during HBO2 administration. For this reason, although it is rare, there should be avoided using drugs that reduce the convulsion threshold during HBO2 treatment.

A written informed consent was obtained from the patient.

Study conception and design, analysis and interpretation of results, draft manuscript preparation: I.D.A.; Data collection: S.V.; All authors reviewed the results and approved the final version of the manuscript.